Top 5 Android Development Frameworks to Use in 2022

Top 5 Android Development Frameworks to Use in 2022 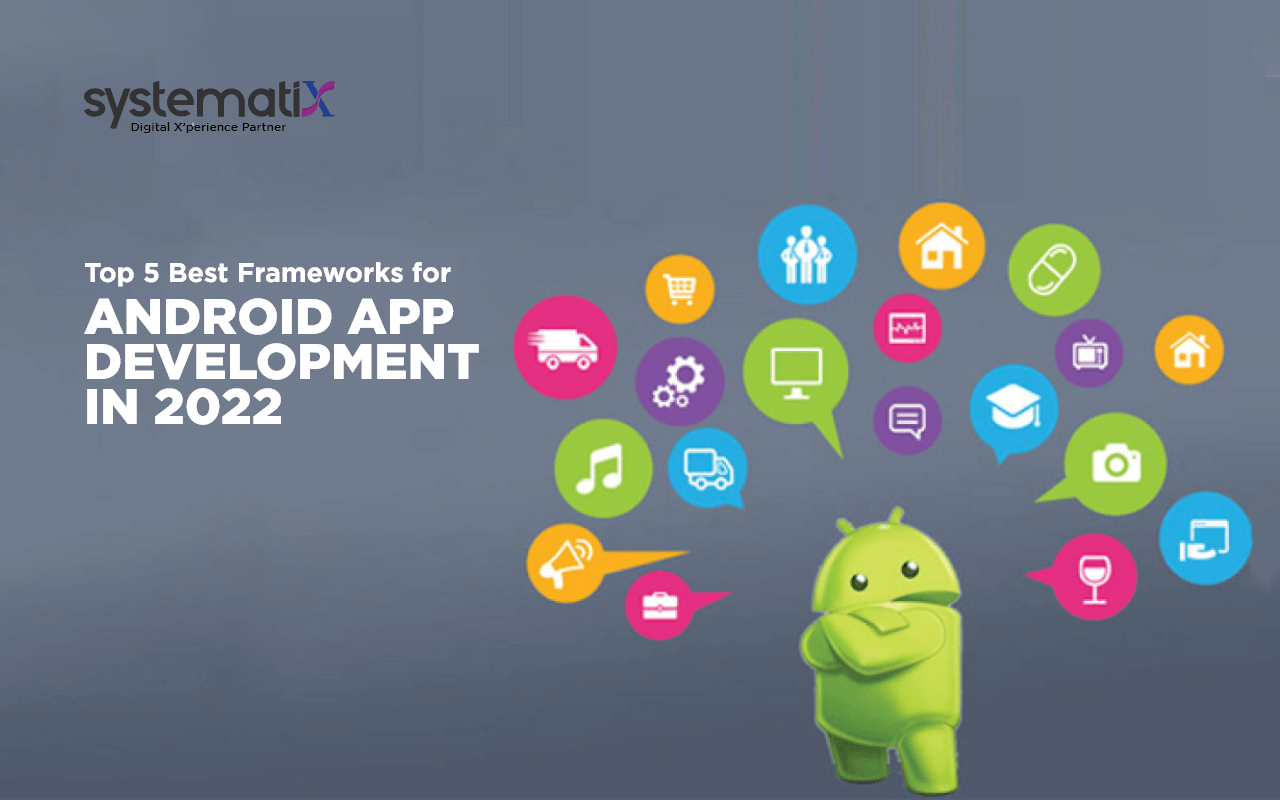 Android is the most widely used mobile operating system in the world today. In 2022, it’s expected to have a market share of more than 87 percent, making it the ideal platform for developing personalized apps. Just like smartphones, Android App also dominates the tablet industry and has ambitions for computers, vehicles, set-top boxes and wearables, as well as home appliances.

As a result of these factors, as well as the massive worldwide community forum behind Android and the platform’s high degree of customizability, many mobile app development services now prefer to create Android apps. Since Android’s popularity has skyrocketed, it has become more difficult to pick the best framework for an app’s coding needs. When trying to figure out which Android platform is ideal for their project, many Android app developers become lost along the way.

With this in mind, we’ve put together a detailed list of the best Android frameworks to consider for android application development in the years to come, from 2022 and beyond.

What is an Application Framework?

Using an Android application framework, programmers may put together a final app that fits their client’s specifications. A framework lays the foundation for an application, which may then be enhanced with additional features and functionality such as graphics, animation, and special effects.

There are many similarities amongst Android app development frameworks, but they also have distinct characteristics that make them better suited to specific applications. The framework you choose for your application should be based on the unique needs of your project.

It might be difficult to identify Android app frameworks that stand out and suit the demands of both developers and stakeholders because there are so many of them. To separate the sheep from the goats, we implemented the following set of standards:

Developers may utilize the same codebase across all operating platforms, resulting in an app that looks, feels, and functions the same on any device. As a result, all updates and fixes are immediately reflected. You may save time and money even if your primary focus is on Android development by starting with a framework that can be used across numerous platforms.

It is important for Android app developers to work with frameworks that help the design process, with few roadblocks. They are likewise interested in finding and fixing issues as quickly and easily as possible during the development process.

The ability to alter framework features to deliver the optimal user experience for each project becomes increasingly important as apps get more sophisticated and complicated.

With the use of HTML5, CSS3, and JavaScript, Ionic, a free and open-source Android framework, developers can create progressive hybrid apps. Because of its cross-platform capabilities and the ability to incorporate AngularJS, Ionic has become one of the most popular frameworks for Android development.

This Android framework has a basic CLI that allows for features like live reloading, logging, and emulators to be implemented. Ionic has already attracted a considerable following due to its use of Cordova and Angular.

Almost 4 million Ionic-based apps have been created, with more than 5 million professionals in more than 200 countries across the world adopting the framework. As a bonus, it works with a wide range of services, including Google Play and Instagram.

A native appearance and feel may be achieved regardless of the platform you are using. Since it works on mobile-optimized web components, there is no need to update the code.  Ionic and Angular work together to produce a solid framework, which lowers the cost of the app.

Different mobile operating systems are available for a wide range of devices. Any mobile application we create must be cross-platform compatible with the various operating systems. With the same codebase, developers can design apps that perform well on various mobile devices to provide you a consistent appearance and experience.

Frameworks such as Angular are widely used for building web and mobile apps. There are a number of HTML extensions provided by Angular that prove handy to developers. Using Ionic and Angular, it’s possible to add appealing components to the application with a variety of features. Angular JS with the Ionic framework are a perfect match.

Developers may use a variety of plugins using the ionic framework. Designers may use a Cordova plugin to access a variety of components. Using these components, you may make your application more visually appealing. These plugins may be used by Ionic developers to create the perfect mobile app.

Designs with a Sophisticated Aesthetic

This framework helps developers to build sturdy and simple designs. It is possible to customize the look and feel of your app using Ionic’s many themes and components, which can help you attract more users.

An easy-to-use app development environment is provided by Ionic, which may be used to develop mobile apps. Any component may be used to boost mobile performance.

As a multi-platform SDK designed and supported by Google, Flutter may be used to create apps, but in a way that is distinct from existing Android frameworks. It is developed in Dart, which facilitates cross-platform development. Hybrid app development is best served by Flutter as a framework choice.

Using a rendering engine called Skia, Google’s Flutter Android framework mimics the material design and Cupertino style aesthetics. As a testing framework, Flutter allows developers to run UI and unit tests as well as functionality testing. As a result, Flutter’s hot reload feature is the finest in the industry, allowing for smooth testing without having to restart the app.

Flutter is a Google-backed open-source platform. With the help of reputable Flutter app development solutions, you can turn your innovative app concept into a cost-effective product.

Reloading in a Flash

Flutter has an advantage over its competitors because of this functionality. It makes it simple for programmers to try out new ideas. They are able to create an intuitive user interface, incorporate important functionality into the program, and troubleshoot problems with their apps using Hot Reload.

Widgets are at the heart of the Flutter platform. Widgets may be used to create an attractive, dynamic UI tailored to the client’s business strategy. Custom widgets may be created in Flutter with the confidence that the app will run as natively as possible.

Flutter is an excellent solution for cross-platform app development since it just requires a single code base to create apps that run on both Android and iOS. App developers can create a Flutter app that functions and looks like a native app.

To help developers create native apps for many mobile platforms using the same C# code, Microsoft acquired Xamarin, one of the leading Android frameworks. Microsoft’s cloud testing solution allows Xamarin-built apps to be tested on a variety of platforms. Codesharing is also a big draw for developers because it cuts down on coding time and errors in software development.

Companies in fields like healthcare and energy began to use Xamarin app development services after it was included in Visual Studio IDE. Xamarin has been around for a while, but compared to other Android frameworks, its user base has grown significantly over time.

C# is the programming language of choice for Xamarin’s mobile apps. In comparison to Javascript and Objective C, it’s a more current form of C++. Object-oriented syntax and simple grammar make headers and references readily available to developers.

It’s not only for smartphone app development; it also works on other smart devices, such as wearable gadgets. Users may design programs for Windows, Mac, and smartwatches using Visual Studio.

Almost everyone in the corporate world likes to use native applications. It’s safe and provides the greatest possible user experience. As a result, native mobile apps are the wave of the future for mobile software. You get all of the advantages of native user interfaces with the Xamarin method. It provides access to specialized functionalities and speeds up the development process.

A robust open-source framework backed by Facebook, React Native provides sufficient compatibility for different development tools and their IDEs. For web-based solutions, React is an excellent JS library. The framework is used by organizations like Instagram, Tesla, and many more Fortune 500 firms to build native mobile apps.

React Native APIs are cross-platform, which means that developers can create code once and execute it on any platform, reducing development time and expenses. Like other Android programming frameworks, React Native makes use of structural components. With React Native’s hot-reload feature, developers may change files while keeping the app’s current state. React Native’s developer community has grown at a rate far above Facebook’s projections.

Write Once Use Anywhere

There are several reasons why React Native is a great framework for developers. One of the key reasons is that the React Native framework allows you to create code once and utilize it on every platform, whether it be Android, Windows, or iOS.

One of the most time-consuming aspects of mobile application development is creating the application’s User Interface (UI). A big reason why React Native is so popular is that it puts an emphasis on the UI.

For cross-platform mobile application development, React Native is a wonderful option. As soon as Facebook released React Native in 2015, it quickly became a favorite among developers all around the world. React Native’s prominence continues to grow despite its relatively new status.

With React Native, you can quickly and easily integrate 3rd-party libraries into your app’s codebase. Because of this, when you hire a react native expert, they may use third-party support right out of the box without having to change anything in their code.

Android developers may use the jQuery Mobile framework, which is built on HTML5, as one of the most basic tools for launching mobile and online applications. The fact that the whole basic app interface may be written in HTML, with minimum or even no JavaScript code, is a huge plus for Android developers.

This framework considerably simplifies different event handling, CSS animations, and Ajax using the jQuery Mobile Android framework. It also has a built-in theme system that allows developers to modify the application’s look and feel to the specific needs of each project.

Easy to use and understand

The jQuery Mobile framework is easy to use and adapt to any situation. For this reason, programmers need to write a minimum or no JavaScript code while creating the framework’s setup interface.

A broad range of browsers and devices may be supported by the framework, from Internet Explorer 6 to the most recent Android browsers. Developers may use Mobile jQuery to render basic content (as created) on simple devices. And as technologies and browsers get more advanced, they will progressively incorporate new, externally connected JavaScript and CSS.

jQuery mobile developers may utilize a simple API to handle touch, mouse, and pointer focus-based user input functions while developing for the mobile platform. The framework also includes a wide range of form components that may be customized and are optimized for touchscreens.

jQuery for mobile was designed with accessibility in mind in addition to its cross-platform features. Accessible Rich Internet Applications (ARIA) are built into the framework to make web pages more accessible to people with disabilities who use screen readers and other assistive technology.

As you have seen, there are a wide variety of Android frameworks to select from, each of which has its own unique set of capabilities that can be used for any type of app development. Having been adopted by the world’s greatest technology companies, each of these solutions has the potential to become the top Android application development framework, depending on their implementation.