Node.js Versus Laravel Versus Django: The best back-end web framework in 2021?

Node.js Versus Laravel Versus Django: The best back-end web framework in 2021? 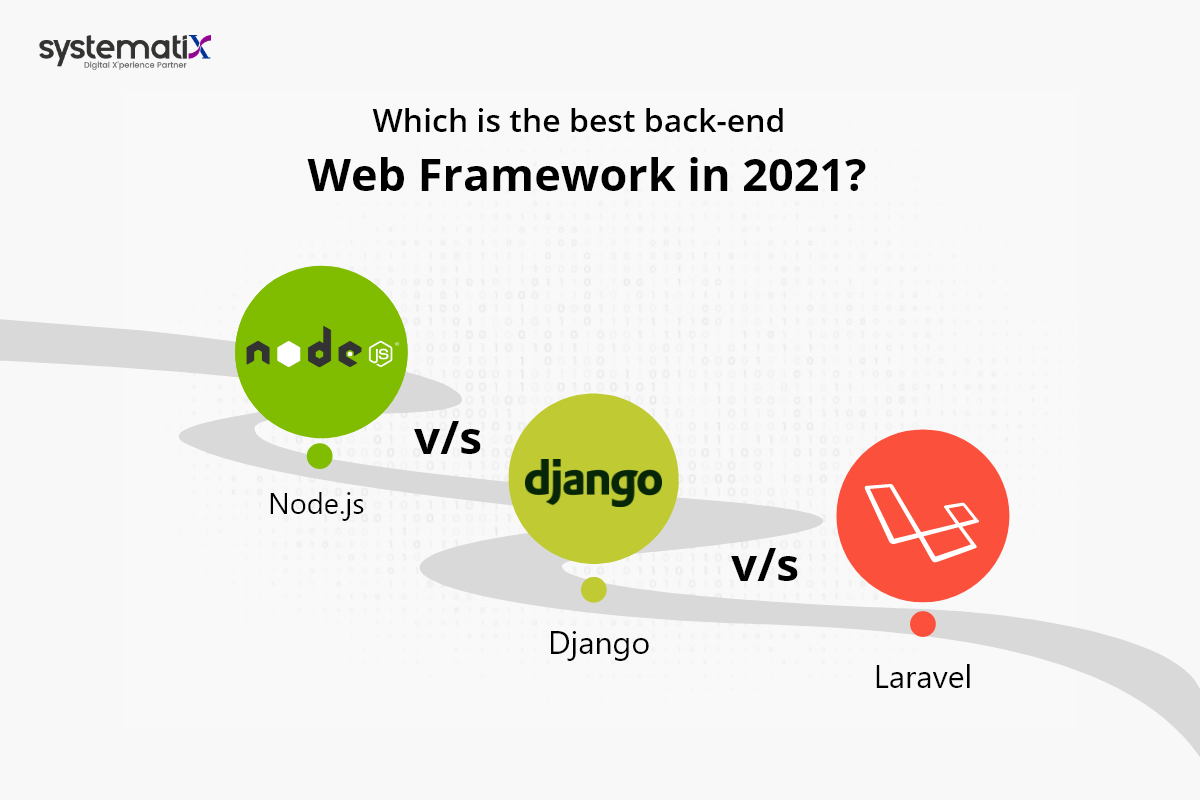 Are you planning to take your business online? Whether you are doing it through a website or a web application, the decision is crucial –especially in the modern digital era that we live in. As you plan on getting your business to the online platform, it is equally important to pay attention to choosing the best web framework for your online presence.

Thankfully, you can come across a myriad of options when it comes to choosing the best web framework for your business. However, with a multitude of choices, it also becomes overwhelming to make the best selection. In this post, we are going to discuss three of the most important back-end web frameworks –Node.js, Django, and Laravel for your online presence. Let us help you know about them in detail while allowing you to make the best ever choice.

Choosing the Best Back-end Web Framework for Your Business

Before you go ahead with choosing the right framework for your business, it is imperative to know what a web framework is. A web framework can be defined as a type of software-based framework that has been created particularly for speeding up the process of website or app development. In simpler terms, it can be said that a web framework is helpful in creating, developing, and publishing simple as well as complex websites and web applications.

In the past few years, an increasing number of web-based frameworks have been introduced in the industry. However, the most popular options for the developer community are Laravel, Django, and Node.js. These frameworks play crucial roles when it comes to all-around website development services. Moreover, the primary objective of the given frameworks is the development of interactive and user-friendly web applications.

The best part is that all these frameworks receive ample support from the global web development community and developers. Therefore, you should know about the best platform to use for the next web development project –Django, Laravel, or Node.js?

An Insight into Laravel

Laravel is a leading web development framework that is created by Otwell and Taylor. To work on Laravel, it is imperative for web developers to have basic knowledge about PHP –even at the foundation level.

Laravel features built-in highlights for providing ease to a major part of improvement interaction. This helps in decreasing the overall advancement time. A number of applications that are developed with the help of Laravel are meant for the board framework. Moreover, it is observed that Laravel helps in upscaling highlights that lead to improved traffic towards the site.

Laravel is regarded as a full-stack, open-source PHP framework. The best part about this framework is that it is loaded with a myriad of advanced features required for web development. Whether you wish to create a small or a large project, Laravel can help you out. A majority of web applications that are designed using Laravel are meant for content management systems.

Reasons to Use Laravel:

When to Use Laravel?

Web developers can make use of Laravel for implementing:

An Insight into Django

Django serves to be a lightweight framework that is based on Python. The given framework was introduced in the year 2005. The given platform is known to make use of the MVT or Model View Template architecture scheme.

Django framework serves to be the most reliable option when you are working on a complicated project. A number of successful startups make use of the Django framework for improved results –including Instagram, Mozilla, and others.

One of the major benefits of using Django is that it offers the ease of integrating solutions for reducing the overall development time. The framework is also effective in enhancing the all-around development process through the integration of robust features. This helps in lowering the time to market for application development. As far as working on complex projects is concerned, the Django framework serves to be the topmost choice.

Reasons to Use Django

Some of the reasons to use Django for website or application development are:

When to Use Django?

Django, as a web development framework, can be utilized for:

An Insight into Node.js

Node.js does not only serve to be a framework, but it also plays the role of a full-fledged server. It is termed as a JavaScript-based, open-source runtime environment playing a vital role in the overall development of high-end, cross-platform websites or applications.

Node.js is also known to include event-driven and asynchronous APIs. As a matter of fact, the framework serves as the first choice for several developers as it functions on a single thread. This also helps in the process of block elimination during execution.

The entire server is event-based. It gets triggered upon receiving callbacks. It also helps in preventing the application from the state of sleep or pause. For the best outcomes, it is recommended to hire services from the best Node.js development company.

Reasons to Use Node.js

You should make use of Node.js development services for several reasons. Here are some:

When to Use Node.js?

If you wish to accelerate web development, Node.js can be utilized for a wide number of applications. Here are some:

Node.js Versus Django Versus Laravel –Which to Use for Web Development 2021?

If you wish to achieve the best results for your web development project, then here are some major points of differences that you should know about Node.js, Laravel, and Django:

As far as community & support are concerned, then Node.js is known to lead the given aspect amongst another backend framework with major ratings on leading platforms.

It stands next to Node.js with respect to community and support.

Django features the smallest community of developers of the other frameworks.

It serves to be an open-source framework functioning on the JavaScript Engine by Chrome V8. It is known to function according to the event-driven architecture and the non-blocking I/O structure.

The primary goal of Node.js is to allow developers to develop web applications in an effective manner.

It serves as the MVT or Model View Template scheme that is based on the famous Python programing language. The main objective of the given framework is to encourage developers to implement codes in an efficient manner.

Laravel is known to be based on PHP. It follows the unique MVC or Model View Controller scheme. Most of developers around the world appreciate this framework (serving as the open-source web development framework) for offering a wide range of features and functionalities.

In most cases, Laravel is utilized for developing web applications in quick deployment time. However, it is not known to deliver access to features like authentication, routing, and so more.

Website or mobile application developers out there might face specific issues while using Laravel as the web development framework. This especially occurs while rendering and during the creation of multiple versions of the particular application. Also, as far as performance is concerned, Laravel does not deliver effective results in comparison to other frameworks.

This framework turns out useful during the development of cross-platform applications. It delivers access to top-quality scalability and handling. Moreover, the given feature also offers the ease that the web developer is able to manage the overall workflow effectively.

If, as a developer, you are familiar with JavaScript and its basic concepts, then you will not face any problem while learning to code with Node.js. However, you should also note that because of the asynchronous programming capability of the framework, it might get slightly hard to code for the developers.

In comparison to other frameworks, Laravel is known to feature a steep learning curve in terms of the entire programming. Still, the framework is known to be available with a myriad of useful documentation along with highly innovative tools to help the developers. One such tool is the Laracasts –helping developers to have great access over the PHP framework.

The given framework is regarded as highly developer-friendly for the development of interactive websites or web applications. This is because Django is easier to learn. It also offers the overall ease of implementation in complex projects. To top it all, as a developer, if you feature a strong command over the syntax of the Python programming language, then you will not face major problems with respect to using the Django framework.

Node.js, as a web development framework, functions efficiently on most platforms or devices because of its lightweight server. At the same time, the framework is also capable of managing multiple requests with great ease.

The framework features a lower development speed in comparison to other frameworks.

The framework features an innovative range of advanced plugins responsible for boosting the overall speed of development time as well as tasks at hand.

The given framework is renowned for offering access to advanced security for delicate code structures. However, there will be some problems in the security journey with this framework as well.

Laravel is famous for providing access to improved security in comparison to other options. The framework makes use of the revolutionary hashed password mechanism for ensuring the storage of all passwords in the database in a secure manner. Moreover, Laravel also helps with the structured processes for dealing with vulnerabilities like cross-site scripting, SQL injection, and so more.

The framework makes use of effective security mechanisms for managing a number of vulnerabilities, security attacks, and so more. Moreover, Django is also known to provide alerts for security-related errors to the developers.

As a developer, if you are concerned about choosing the best framework for web application development, then you should look into the specific set of requirements that you wish to implement in the given application. For the best outcomes, you can hire reliable website development services from the best web development company as you choose them based on different factors of value and engagement that serve you the best in your case.