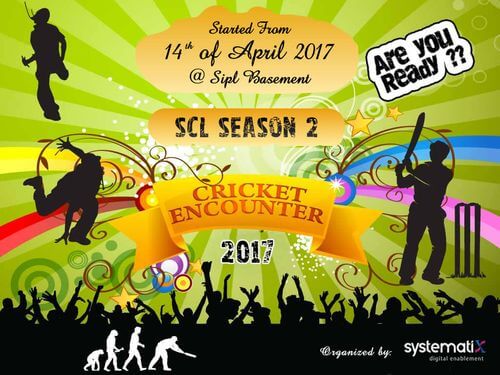 Summer of 2017 witnessed another intoxicating season of SCL (Systematix Infotech Cricket League). The shot up craze as compared to its predecessor event, could be seen and felt throughout the season. Summers already sets the cricket mania in the country and SCL brought a new wave of it across Systematix held every Friday evening.

Spread over 6 weeks the tournament consisted of 24 teams contesting against each other in 24 matches. The event which ran across 5 rounds (culminating in finals in the 5th one) throughout witnessed a rising excitement.

Started on 14th April 2017, Round 1 began with the first 4 matches held between-

21st and 28th April witnessed the concluding Round 1 between-

Round 2 was concluded with matches between-

Round 3, the quarterfinals were held on 19th May among the winners of first 2 rounds.

There was a surprise twist announced just 2 days before the semi finals. Out of the 21 teams who were out of the knockout, 1 team was given a wildcard entry giving it one more chance to win the tournament. The Game Changers was the lucky team among all to get in the semifinals. Semi finals were held on 25th May between-

Finally The Ball Busters won and the 2 heavy weights faced each other in the finals.

Digital Ninja 1 VS The Ball Busters

Despite the heat of May, the people in the basement were enthusiastic. As the norm, National Anthem was played out before starting the final match between- Digital Ninja1 and The Ball Busters. Mr. Sunil Rawat’s presence brightened the moment for players as well as the spectators. He was seen later trying a hand at batting sharing a lighter moment with the players. The match was of 20 overs as opposed to the 10 overs matches held all through the tournament. The excitement has just gone too much in second inning after refreshment break. Hall got Eco with clapping and commentary on each ball made it full of laughter. The match stretched to good 2 hours and after the nail biting and edge of chair excitement the team which came out with the flying colors and the undisputed winner of the tournament SCL season 2 was- The Ball Busters.

The whole Systematix family is now looking forward for SCL season 3 which would be held in Summer 2018 and hoping the excitement and fun would snowball next year!