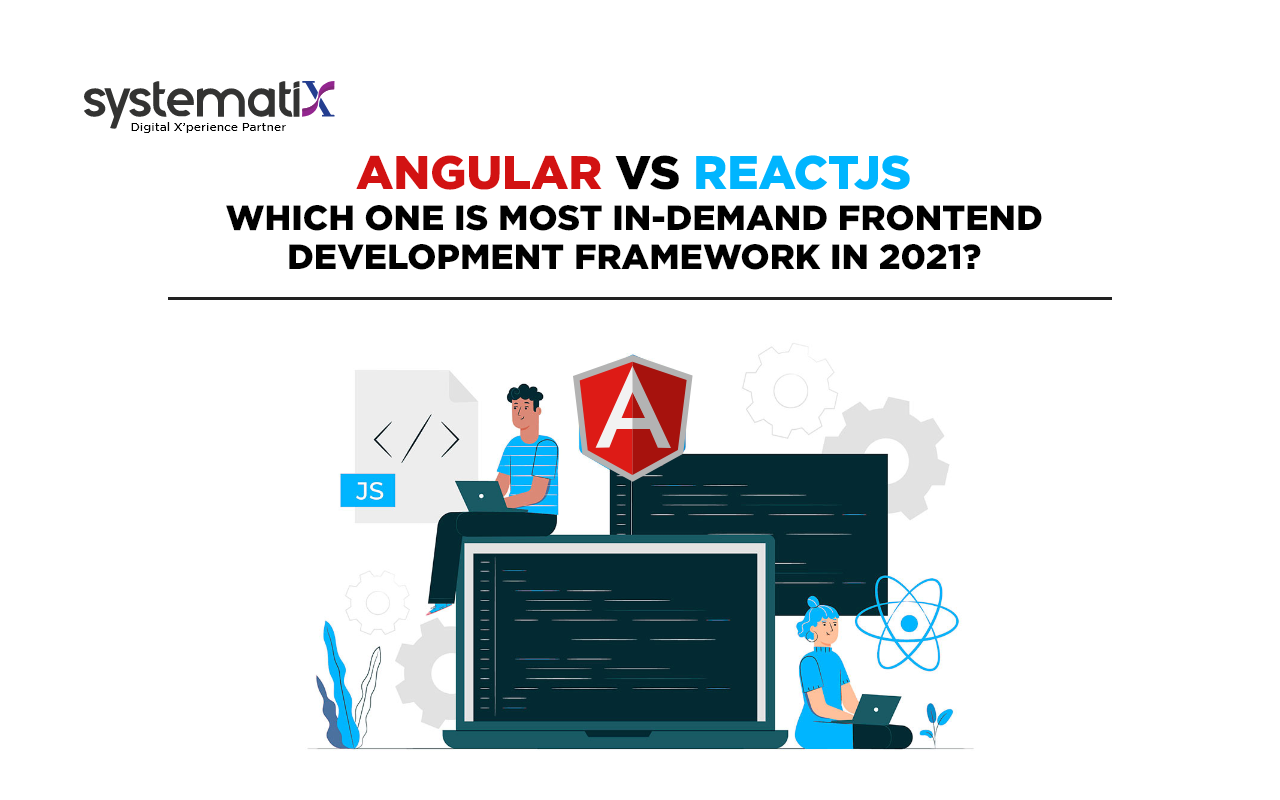 AngularJS and ReactJS are two of the most sought-after web frameworks among developers globally in 2021, according to Statista. But which one is ideal for you and your needs going ahead from here?

At first, comparing Angular versus React makes little sense because the former is a framework and the latter is only a library. However, when it comes to designing interactive apps, both terms emerge frequently. Both are appropriate for this, but their techniques are somewhat different.

In recent years, there has been a fundamental shift in the programming of Internet apps. Previously, complicated Internet pages required the installation of complete programs (PHP / Apache Server or Java / JS / Tomcat). With the advent of current Javascript frameworks, it is now feasible to combine any programming language and system with a front end to offer.

Previously, PHP and Java were utilized on the backend for server-side programming, while Native Javascript was used for client-side development. Javascript is now used as much as possible for development. Nowadays, Angular and React have become the industry standard for front-end development. Every experienced web developer wants to know which one is the easiest to learn and has the most market demand. To determine which framework is most famous for web development, it is necessary to understand the distinctions and benefits that each one provides.

Comparison between ReactJS vs AngularJS

Angular JS is an open-source front-end web framework built on HTML and JavaScript. It is an open-source and MVC application designed to seem like javascript. Google created and is responsible for the upkeep of this web framework. Aside from that, there is a sizable and growing community of people that support this framework. Angular, as a structural framework, is commonly used for constructing dynamic web apps.

Angular is a model-view-controller (MVC) platform. Thus, it sets strict guidelines for how applications should be structured. Consequently, “out of the box” functions can be utilized, significantly influencing the application’s loading speed. For mobile apps, Angular provides the Ionic framework.

ReactJS is a mighty JavaScript toolkit for creating user interfaces. Building interactive UIs becomes pleasant and straightforward for developers when they use this framework. This is an excellent tool for building UI components like search bars, on-screen menus, buttons, and other elements that aid in user interaction. It is ideal for creating high-end user interfaces for web applications with less code and time.

ReactJS, created and maintained by Facebook, is extensively used to generate web pages and online apps. It is also backed by a development and stakeholder community. React is primarily intended to expand sophisticated interactive user interfaces in online and mobile apps for Android and iOS.

One significant benefit is that React is a virtual DOM that checks prior HTML code variations and loads the appropriate components. This has a substantial favorable impact on the application’s loading times. Because React handles both HTML and code in the same file, you may output variables in a view component (JSX). React also provides a React-Native option for mobile apps.

The Pros and Cons of Angular

The Pros and Cons of React

What is Angular Great for?

Angular accelerates front-end development and is renowned as the fastest standalone solution for developing data-driven web apps. Because Google engineers designed it, you may be confident in its dependability and code efficiency, supported by a large community of specialists. When it comes to web applications, Angular is most recognized for its model-view-controller features, which improve the functionality of browser-based applications by reducing the amount of Javascript code necessary to make the application functional and robust.

Paypal is one of the world’s largest and most widely utilized payment gateways. It uses Angular to build the PayPal checkout system, including critical functionality like the payment review and credit card pages. As primary needs, these elements include a high level of security concerns as well as seamless functions.

Over 10 million freelancers that use Angular work on Upwork, which is the largest freelancing marketplace in the world. It is critical for high-functioning platforms such as Upwork to utilize technologies like Angular to maintain the features operating smoothly and to reflect changes in a fraction of a second, which is why Angular is being used extensively.

Localytics is a well-known technology used by various firms, including Microsoft, The New York Times, HBO, etc.  To increase its capabilities and establish itself as a separate identity, it has used the Angular UI suite, which has resulted in a significant reduction in the amount of code necessary to keep it operating at peak performance.

What is ReactJS excellent for?

ReactJS is a free and open-source toolkit for building web applications. It manages the application’s display layer, and developers find it helpful in designing reusable user interface components. It is rapid and scalable to make changes to the data without having to reload the page. ReactJS was first used on Facebook and later on Instagram’s news feed, where it continues to be used today. ReactJS is a popular framework for large-scale apps that allows data to be loaded without refreshing the page.

Reasons to use ReactJS include:

Use Cases for ReactJS:

Netflix, a world-class video streaming service provider, makes extensive use of ReactJS, particularly for low-performance devices. To improve runtime efficiency, Modularization, and startup speed, companies such as Netflix use the ReactJS toolkit.

The New York Times has launched a whole new effort to track down specific celebrity sightings on the Oscar red carpet. The project was built using the ReactJS framework, and it enabled users to search for and apply filters to the photographs they wanted to see. Several people have praised ReactJS for its ability to re-render pages after they have been rendered before.

ReactJS plays a significant role in Instagram. Numerous aspects, such as geolocation, Google Maps API, search engine accuracy, and tags, demonstrate this. And all of this is included within the application’s API, which is rather astounding.

What is the difference between the front-end frameworks Angular and React?

Angular is a comprehensive web framework, whereas ReactJS is a JavaScript library that works with Angular. In contrast to React, which must be combined with other libraries and frameworks to produce a comprehensive web application, AngularJS is a complete web development solution in and of itself. Angular serves as a framework for the development of web-based applications. Because it is a library, React provides a variety of JavaScript methods and a collection of code that may be used to create web applications.

Even though they both use reusable, modular, and comparable components, their technology stacks are vastly different. ReactJS developers use Javascript to program the creation of ReactJS applications. The AngularJS development services, on the other hand, program AngularJS development using TypeScript in the form of JSX, which is an error-free programming language.

Size of the Framework

The AngularJS framework has several functions, ranging from testing tools to template generation. As a result, it can consume a significant amount of space (up to 500 KB). If your company is embarking on a substantial project, it would be prudent to choose Angular. If you are genuinely considering developing one-of-a-kind web apps with AngularJS, it is usually recommended that you engage web developers. They will be well-versed in dealing with a wide range of situations and requirements. Having confidence in the managerial abilities and end product that they will bring to the table is a given.

However, ReactJS uses a lower amount of space on the server (about 100 KB). If you want to create a lightweight online application, you should consider using React as your framework.

If you work with ReactJS, you need to learn JavaScript, a straightforward language. On the other hand, when it comes to AngularJS, you need to be familiar with a specific syntax.

In this case, the two technologies are opposed to one another.

Angular and React are two frameworks that may be used to build mobile apps. In the case of Angular, this is the Ionic framework, which uses the Cordova container included with the framework. On the other hand, the generated application is simply a web application running inside a web browser container.

There is no such thing as a React framework in React. React Native is a platform for developing mobile applications that are entirely native to the device.

In the case of React, you must first learn JSX, which is a simple language to master. Then you’ll need to know about routing libraries, such as react-router v4, and state management libraries, such as Redux or MobX before you can go on.

In the case of Angular, a wide range of issues must be investigated, starting with the fundamentals, such as directives, modules, decorators, components, services, dependency inputs, pipelines, and templates. Following that, more complex topics like change detection, zones, AoT compilation, and Rx.js are covered in detail.

As a result, learning Angular is a little more complex than learning React.

Because Angular is developed in TypeScript, you will need to learn the language to work with the framework.

React makes use of JSX, which should be recognizable, to Javascript developers who are familiar with the language. On the other hand, the training period is less complicated and does not need as much preparation.

Angular is a web application framework that does not require any extra libraries to develop web apps. Because it is a comprehensive structure, it is relatively rigid and inflexible due to its framework.

In most cases, using React alone will not be sufficient to construct a web application. It is generally advised to utilize extra libraries in most situations. This increases its flexibility while also making it simpler to incorporate into existing systems.

Angular adds a watcher for each binding to keep track of all changes to the DOM. As soon as the view is refreshed, the new values are compared with their predecessors. Larger applications may suffer as a result of this reduced performance.

Since React operates on a virtual DOM when a view is modified, the new DOM compares itself to the virtual DOM and changes the perspective appropriately.

Angular versus React: What to Look for When Making a Decision

On the one hand, Angular is a comprehensive toolset that allows you to construct a web application from the ground up, including everything from development to testing. On the other hand, React is a versatile framework that relies on the assistance of different libraries to be used in custom web development.

Angular is the framework to use if you require:

If you require the following functionality, use React:

While React is a JavaScript package only used for User- Interface (UI) development, Angular is a web development framework used for all aspects of web development. However, although React is more straightforward, React’s complete solution is only achievable with other JavaScript frameworks and specialist tools. On the other hand, Angular can provide comprehensive solutions on its own, even though it is difficult to understand. Additionally, the aim of adopting any of these frameworks may differ, with React being best suited for constructing user interfaces and Angular being best suited for developing single-page apps.

Because both AngularJS and ReactJS are being upgraded continuously to edge past one another, there is no apparent winner at the end of the day. It’s a never-ending cycle that has no end in sight. It is a question of preference whether you hire an AngularJS development company or use ReactJS developers for development. React may be used to create user interfaces, while AngularJS can be used as a foundation for a web application. It is entirely up to you to choose the best suits your preferences, skill level, and convenience!

Read Also: AngularJS vs. Node.js – Which is the best for your project?